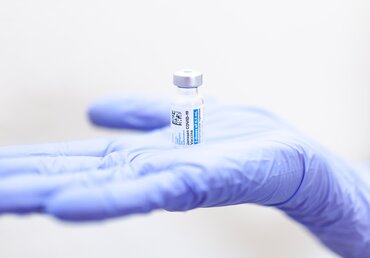 The FDA’s new warning pertaining to the Johnson & Johnson one-shot COVID-19 vaccine has caused concern throughout the health community. The new warning, issued by the United States Food and Drug Administration, says the shot has been linked to a disease called Guillain-Barre Syndrome where the immune system attacks the nervous system. Approximately 100 cases of Guillain-Barre have been discovered in people who received the vaccine out of 12.8 million total administered doses, according to the CDC. 95 of those cases were serious and required hospitalization, including one death. The cases have mainly been reported in men aged 50 and up. Most people diagnosed with Guillain-Barre fully recover with proper treatment.

Jeanne Marrazzo, director of infectious diseases at the University of Alabama at Birmingham, believes the risk of contracting Guillain-Barré from the vaccine remains minuscule. “It should not deter people from getting vaccinated… This news does not provide an excuse to remain unvaccinated,” she wrote in an email to The Washington Post.

As the Delta variant becomes more prevalent than ever, the federal government’s efforts to get more people vaccinated could be hindered by this small but significant warning. The nation already missed President Joe Biden’s self-imposed deadline of July 4 for having 70 percent of people with at least one dose. As of today, there is no data that suggests a link between either the Pfizer or Moderna vaccines and Guillain-Barre syndrome. Both Pfizer and Moderna, requiring two doses to take full effect, were developed using different processes from the Johnson & Johnson.

Earlier this year, there was a short pause on the use of the Johnson & Johnson vaccine due to blood clots found in recipients. Johnson & Johnson also had to discard approximately 75 million doses of their vaccine due to contamination issues at one of their major distribution facilities. According to the Washington Post, the CDC tracks Guillain-Barre syndrome each flu season. Federal health officials maintain that the benefits far outweigh the risks of being vaccinated at this time and highly recommend that everyone eligible for vaccination get the shot as soon as possible. Vaccines are readily available throughout the country, often without needing an appointment.

We hope this information on the FDA’s new vaccine warning is helpful to you.

Empower Brokerage is dedicated to helping you educate your clients on the insurance they need and staying on top of their health. Whether it’s through webinar training, one-on-one calls, seminars, or marketing plans. We want you to be successful. Give us a call at 888-539-1633 if you have any questions.